The Bicentennial was a big deal in 1976. Enormous bales of marketing hay were made as every major brand in America hopped on the nostalgia train. Even Playboy. The July 1976 cover of Lady Liberty was liberated of everything but a sheer white sheet.

Starting at 12:01 am on January 1, 1976, TV was wall-to-wall with promises of tall ships sailing into harbors up north, excruciating details about the new hall for the Liberty Bell in Philadelphia, and exaggerated hype for the celebration that would be July 4th.

The Bicentennial fell on a Sunday and my high school band was invited to participate in “America on Parade” at Walt Disney World. Here’s an exceptionally cheesy clip of that parade; my band might (might) be glimpsed at about the six-minute-mark (you’re excused from persevering through six minutes).

The band rode on buses from St. Petersburg to Orlando. Our gig was to march down Main Street USA three times a day for three days. The parade route was short and the park was big and we were young and invincible. Except, on the parade route, we were clothed in wool from head to toe. We even wore spats. During the daytime, temperatures were in the 90s. More than a few of us fainted in formation. Night parades were better but only marginally. 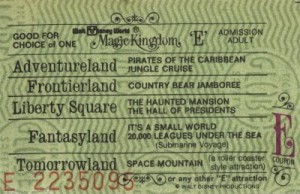 The payment for our torment was in tickets, which in those days were graded by letter. E tickets were golden — the best rides, like Space Mountain, and the Haunted Mansion, and the Jungle Cruise all required an E ticket. Thanks to those parades, we had E tickets to burn. We rode the best rides repeatedly and with abandon.

Sunday night, July 4, 1976, at the end of our last parade, we filed behind one of the carefully placed wooden curtains that shield Magic Kingdom reality from the make-believe experience. The fireworks were about to start, the biggest boldest fireworks ever since this was the Bicentennial at Disney World.

Sitting on a pile of sand beneath the spires of Cinderella’s castle, with the three cutest boys from the band and a pocketful of E tickets, dream-come-true seemed almost real.

Read All About It