Bud Lee was only 74 when he died this week and he’d been in a nursing home since a debilitating stroke in 2003. The photo shoot I commissioned from him was probably his last.

Bud worked with my friend Lynn Waddell and he saw the Painted Mary I gave to Lynn and her husband, James Harvey, as a wedding present. In exchange for building him a website, Bud took pictures of Lynn and James’ wedding, a collection which is highly odd and unusually interesting.

Bud told me about some land owned by an artist friend. With glowing eyes and fevered passion, he told me this was the perfect place to photograph my Marys. We had to do it. What I could afford to pay him was not the least concern; he had an image in his head that he was determined to translate.

He asked me to pick him up. His house was stuffed with fabric and photographs and it took effort to pry him away from a tour of every remnant. We drove to his friend’s estate somewhere east of Tampa, a sprawling contemporary surrounded by grounds thick with ginger and ferns. A copper colored creek ran along one property line; a pool lined with black stones by a built-in grotto defined the other.

I kept urging him to stop. It was blazing hot. He was clearly unwell. Bud ignored me, sweating and panting as he gasped out instructions. Move the pink one forward. Turn the purple one to the back. When Bud had taken all the photos he could, he dove into the pool fully clothed, which might have staved off a stroke from happening right then.

A week or so later, he stopped by my house, still sweating and panting, still gray. But he was happy with the shoot, even if we never got around to taking the Marys into the grotto. He handed me a fistful of negatives, old fashioned three-inch squares with jewel tones that sparkled in the sun. Less than a week later, he had the stroke.

Here are those pictures. Click the thumbnail to see the full beauty of each one. 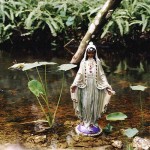 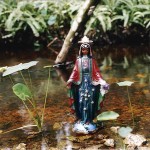 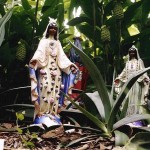 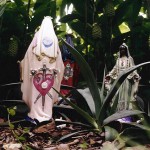 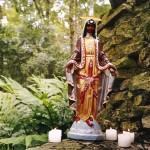 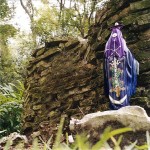 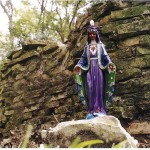 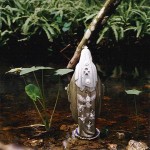 Rest in peace, Bud. You deserve to rest in much, much peace.

You Deserve A Break Today