Scene in The Deep

I didn’t take that picture, but I saw a huge Spotted Eagle Ray when I was snorkeling in Leinster Bay last week. 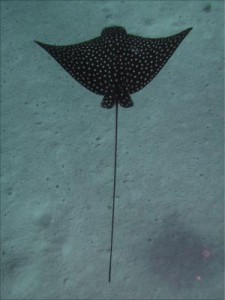 The ray I saw looked more like this one (another photo I didn’t take). I was floating along in total bliss because I had just seen my first sea turtle. The current had carried me beyond where the boats moored, near the channel to Waterlemon Cay. The water was very deep. In that kind of water, I feel thrilled and anxious. Perhaps those emotions are symbiotic. In deep water with only a mask and snorkel, I am not in control. I am an uninvited visitor whose safety depends on the whims of my unintended hosts.

I looked down and saw the gigantic Spotted Eagle Ray gliding beneath me, stories below but thanks to gin water, crystal clear. The spots on its black back shone like stars, as magical a cape as Merlin could have wanted. If its wing span was eight feet, as the voice in my head pronounced — warning: do not assume the voice in my head has any authority; it just sounds that way — its tail trailed another ten. The requisite fish escort hustled to keep up. As did I, far above. It quickly swam beyond my ability, but for those few moments, my heart pounded with joy for witnessing the freedom and power of such a majestic creature. If I been looking anywhere but down at that instant, I would have missed it. Fate. Chance. Does the gamble accentuate the fun?

But I digress. I had just seen my first sea turtle. I snorkeled five beaches on St. John last summer and while my friends saw turtles, I did not. My chiropractor, a snorkeling freak who holds a license in both St. John and St. Croix, told me she always sees turtles at Leinster Bay. That’s the reason I begged my friends to endure the mile walk from the parking lot to the beach. 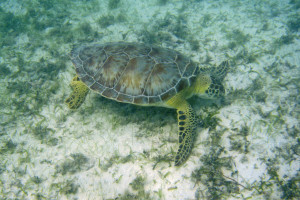 I’d been in the water for no more than ten minutes when I saw a big turtle nibbling the sea grass that covers the floor of the shallow bay. My turtle looked much like this one, another photo not taken by me. I watched as silently as I could from maybe twelve feet above, until my stupid mask started to leak and I had to kick up to clear it. By the time I got re-situated, the turtle was gone. Minutes later, I saw the Spotted Eagle Ray, so it wasn’t a terrible chain of events. 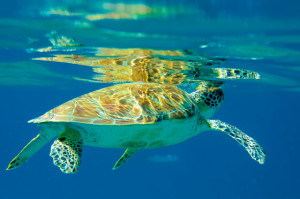 When I swam back from Waterlemon Cay, I saw a teenage turtle. I stopped. He swam for air and I poked my head up in time to see his nose above the water. And then his eye. He ducked down and came up again. I swear he was looking to see if I was there. And I was. He repeated the ritual one more time and then dove down. But instead of swimming away, he started a long lazy spiral from the bottom, circling closer and closer to where I hovered, barely moving, barely breathing. It was mystical. Mind blowing. Free communion. 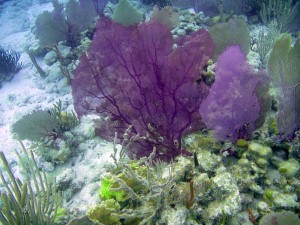 And reefs lined with coral like stag-horn ferns and barrel cacti: 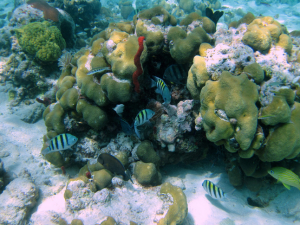 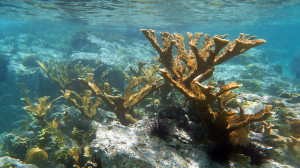 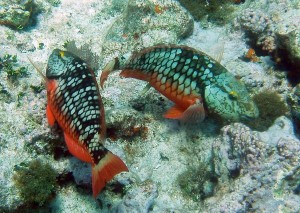 And I saw about a gazillion fish. My favorites were these Stoplight Parrotfish, which I thought looked quite Venetian in their coloring. Although they, like many others I observed, could be contestants on the new Bravo series, “Fish Behaving Badly.”

All I can think of is how to get back to St. John as quickly as possible, and certainly within the next twelve months. There are no words to describe how it feels to float in perfectly chilled crystal blue water over reefs teeming with psychedelic fish swimming in and out of every shape and hue of coral you can imagine. It’s the epitome of a “happy place” and a memory that can soothe when traffic snarls and people snap.